In order to understand the interplay between contact and advertising impact it is necessary to examine a number of perception factors, such as medium size or visibility, as well as targeting. Looking at figures in isolation provides limited information when evaluating online campaigns.
This is why the joint study, conducted by United Internet Media and Meetrics, took the innovative, comprehensive approach of combining measured KPIs on ad impact while measuring people’s personal perceptions of the ads.

The study looked at four campaigns with a focus on conventional impact parameters, such as brand awareness and recall. Standard ad formats from the Universal Ad Package (UAP) and the large-format MaxiAD+ Exclusive were used.

An excerpt of the main results:

The sociodemographic profile of the reached target audience impacted the length of visibility.

This shows that the sociodemographics of the reached target audience – as well as the value of the targeting – has an impact on the visibility duration.

The advertising impact initially grows with viewing time – over 15 seconds of visibility do not translate into any greater impact, though.

The study results show how multifaceted campaign impacts are. Online campaigns need to be examined in a comprehensive way, and factors such as the reached target audience and advertising media size need to be taken into account. 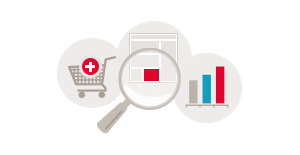 Our research solutions can have an evidently significant effect on the optimal planning and performance of your campaigns.